Spotlight on Dinner at Joe's Co-Chairs 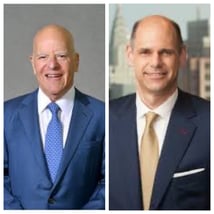 Informed Families is honored that long-time supporters Richard Bermont and Adam Carlin will co-chair this year’s 35th Annual Dinner at Joe’s. Bermont and Carlin lead Bermont Carlin Wealth Management at Morgan Stanley, and they both have a strong track record of supporting charitable organizations in the Miami.

“Having Richard and Adam team up to chair our 35th Annual Dinner at Joe’s is amazing,” said Peggy Sapp, President and CEO of Informed Families. “They are enthusiastic about making this milestone dinner one of our best.”

Bermont received the 2019 James W. McLamore Outstanding Volunteer Award by the Association of Fundraising Professionals Miami Chapter at their National Philanthropy Day event. He is a Membres de la Societe  of the United Way of Miami Dade, past chairman of the UM Citizens Board, and sponsors a week of interviews at financial institutions in New York for a group of students (Bermont/Carlin Group Scholars) attending the University of Miami School of Business.

Carlin’s charitable involvement is equally as impressive. He serves on the board of trustees of The Buoniconti Fund to Cure Paralysis, New World Symphony, and UM / Sylvester Comprehensive Cancer Center.  Carlin received the Johnson A. Edosomwan Leadership Institute Excellence in Leadership Award from the University of Miami and he was named the 2011 'Champion of Community Spirit' by Cancer Support Community- Greater Miami.

Informed Families will host the 35th Annual Dinner at Joe’s at Joe's Stone Crab in May 2020. Contact Milly Davila if you would like to sponsor a table.