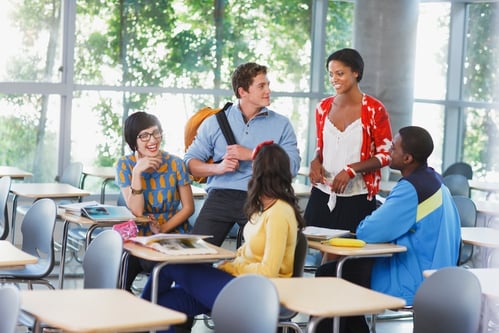 Another school year has begun, and with it, the hope that students will thrive over the next nine months and make it to next summer safe and successful. For principals and superintendents concerned about drugs in schools, there is a ray of optimism: Usage rates among teens are generally remaining steady or slightly declining. However, this news shouldn’t be cause for celebration, but rather, a mandate that prevention initiatives are still important and effective. Too many teens are still engaging in risky behaviors, which rightfully concerns educators, parents and communities who want to keep children protected and drug-free.

Addressing drugs in schools remains a challenge today, as it has for decades. The teens and their lifestyles may have changed, but the overall concern for their safety and health hasn’t. Here are some considerations for prevention in 2016-17:

Too Much Availability, Less Perception of Risk

Despite the mildly encouraging numbers, teens still have too much access to illicit drugs. Perhaps more frighteningly, the perception of risk of using drugs, particularly marijuana, is dropping. One recent study discovered that only a third of Americans believe pot is harmful. These attitudes trickle down to teens, and with good reason—they view images in movies and TV with consequence-free marijuana smoking; they see more states legalize or consider legalizing the drug; and they are exposed to pro-drug messages on social media (and 92 percent of teens are online daily). A lessened perception of harm combined with a high availability is a reliable predictor of future drug use; unfortunately, in 2016, both factors are at unacceptable levels.

The social media aspect of this scenario is especially significant—research has shown teens who visit social networking sites daily are five times more likely to smoke, three times more likely to drink and twice as likely to use marijuana than teens who don’t. Prevention efforts should include strong messaging that kids shouldn’t trust everything they see and hear about drugs on the Internet.

Of course, drugs in schools aren’t limited to marijuana and alcohol—prescription meds are still an issue, and obviously, popping a pill at school is much easier than smoking a joint (or vaping marijuana, which is becoming more prevalent and is less detectable than traditional pot use). The primary misuse of meds generally falls into two categories: opioids such as OxyContin and Vicodin, and amphetamines such as Ritalin or Adderall. Opioid use is dangerous not only because of the drugs themselves, but because when users can’t get pills, they sometimes turn to heroin (which, unfortunately, is still too available and affordable on the street). Amphetamines are especially troubling because students without ADHD increasingly are misusing the pills—especially Adderall, which is now used by more teens than heroin, synthetic cannabinoids and ecstasy—not so much for the high, but rather to help them study. This trend started with college students but is trickling down to younger ages.

Drugs in schools is an important issue for administrators and parents alike. Yet, it’s important to get parents more involved, both on a home level and within their kids’ schools. Families are busy in 2016, and they might not have time to, say, eat meals together or really communicate with each other. But for teens, this is the stage of their lives when trustworthy communication is most needed; quality family time provides an opportunity to instill some anti-drug messages with middle and high schoolers. Involving parents in prevention efforts strengthens not only the school community, but also individual families. Even if a parent never makes it to one PTA or school board meeting or one prevention event, just providing good information on what steps he or she can take to keep teens drug-free will help.

Informed Families sponsors the All Star Safe, Healthy & Drug Free Schools program, which provides schools resources aimed at prevention, safety and student success. The program consists of four initiatives that we sponsor: Family Day, Red Ribbon Week, Lock Your Meds, and Safe Homes Smart Parties. Schools that participate in all four campaigns are eligible to become an All Star School—one is named in every county in Florida, and honored schools receive media recognition and $1,000 of merchandise for the next school year. This is a worthy effort for schools to take as they embark on making 2016-17 a success.

Do you see the problem of drugs in schools improving or getting worse in Florida over the next year?