We Have Something Extra to Celebrate This Red Ribbon Week

Red Ribbon Week, celebrated annually from October 23-31, is the nation’s oldest and largest drug prevention awareness program targeted to K-12 students. The purpose of the commemoration is to raise awareness among the young about the use and abuse of alcohol, tobacco, and other harmful drugs. 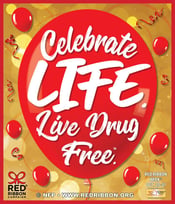 This year’s theme is “Celebrate Life, Live Drug-Free.” And one life we’d like to note this week is the reason we have Red Ribbon Week, to begin with.

The National Family Partnership created Red Ribbon Week following the death of Drug Enforcement Administration (DEA) Special Agent Enrique “Kiki” Camarena in Mexico in 1985. He was killed by drug traffickers while fighting to stem the tide of illegal drugs in our country.

This summer, following the urging of the U.S. government, Mexican Marines finally captured his elusive killer, Rafael Caro Quintero, once known as the “Godfather” of Mexican drug trafficking.

“There is no hiding place for anyone who kidnaps, tortures, and murders American law enforcement,” U.S. Attorney General Merrick Garland said when thanking the Mexican government for its cooperation.

“His sacrifice bolstered the department’s budget, its personnel, and its political standing,” wrote Benjamin T. Smith in “The Dope,” a history of the Mexican drug trade.

For more on the Kiki Camarena story, see this DEA tribute. (https://www.dea.gov/red-ribbon/kiki-red-ribbon-history)

In addition to celebrating the capture of Camarena’s killer, we have many ways to commemorate him this week.

Join us in the observance of Red Ribbon Week by proudly wearing your red ribbon, taking the pledge, and sharing the Red Ribbon message with others.

We have Many Tips and Tools to Help, including:

Red Ribbon Planning Guide, to help parents communicate with kids on the dangers of drugs and alcohol
Parent Flyer, with ideas for talking to your kids about being drug-free. Get it here!

And be sure to enter the 2022 National Red Ribbon Week photo contest to win an iPad and $1,000 for your school. The deadline to enter is November 1, 2022. Click here to enter!

Visit here for all of our Red Ribbon Resources!