A small girl at Redland Middle School waited patiently for the other students surrounding filmmaker Erahm Christopher to leave so she could ask one question: What is the time of tonight’s screening?  I really want my Mom to come and see the film.

Informed Families partnered with Mr. Christopher to host a screening of his film LISTEN at Redland Middle School on February 6, 2020.  Themes covered in the film include bullying, cyber bullying, racism, gang violence and suicide.  Following the screening, students had a chance ask Mr. Christopher questions and voice their thoughts and feelings about the issues featured in the film. The response was overwhelming.

According to Soraya Herran, a guidance counselor at Redland Middle School, the next day “the students couldn’t stop talking about the film and discussion they had participated in.” 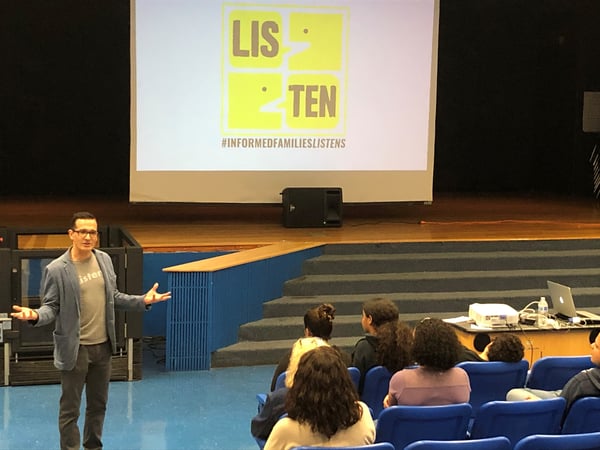 Data from the students surveyed at Redland Middle, highlights the need to address the mental health and emotional well-being of our youth:

Data from the parents surveyed after an evening screening at Redland Middle, highlights the need to address the mental health and emotional well-being of our parents:

Informed Families and Erahm Christopher are partnering to start an open dialogue and provide the resources and training necessary to help students, parents, educators and the greater community know it’s “okay” to speak about their mental health.

“So many destructive behaviors - from bullying and gang violence to underage drinking and illegal substance use – have the same root causes,” Peggy Sapp, Informed Families President and CEO, said. “This is a first step in prevention is educating the public about these behaviors, while reducing the stigmas that keep people from speaking up and asking for help.”